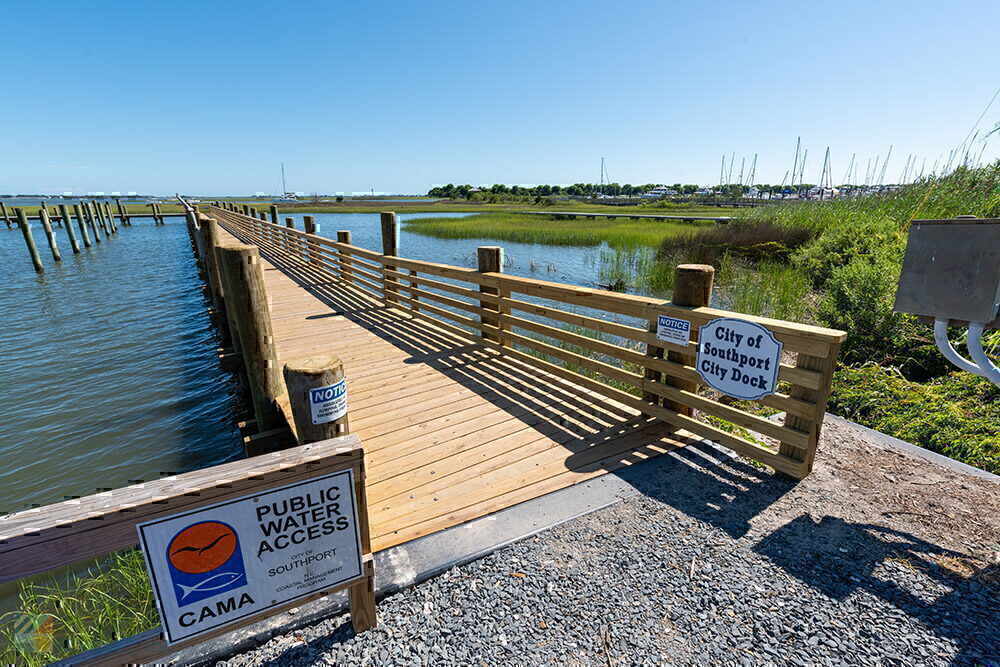 Renowned as a small but substantial piece of Southport’s history that was almost lost in the wake of 2016’s Hurricane Matthew, the Southport City Dock reopened to grand acclaim in the 2021, and has regained its reputation as a popular Southport tourism destination ever since.

Located on the edge of the downtown and close to numerous shops and restaurants, this waterfront destination is worth an exploration for any Southport visitor who wants to enjoy a little fishing, birdwatching, or just an easy-going stroll on the water, with miles of views along the way. 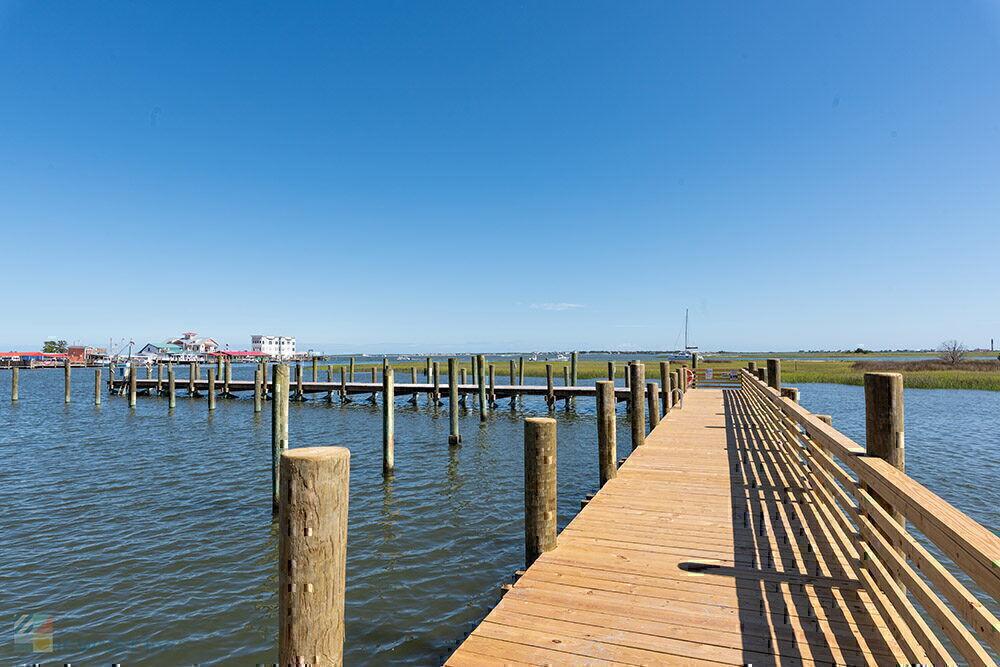 History of the Southport City Dock
Southport has boasted a small but strong working waterfront, starting with the establishment of Brunswick Town and Fort Johnston in the early 1700s, which made the Cape Fear region a bustling point of international commerce.

While the grand shipping industry ultimately moved north to Wilmington, (with the Port of Wilmington officially established in the mid 20th-century), Southport nonetheless remained a hub for people who worked on or enjoyed the water, and the Southport City Dock was originally built in the late 1950s to accommodate this growing tourism-based and commercial-based need.

The Southport City Dock was a fixture in the downtown area for the decades that followed, and was considered an icon and a symbol of Southport’s maritime history, while also serving as a working dock on a day-to-day basis. 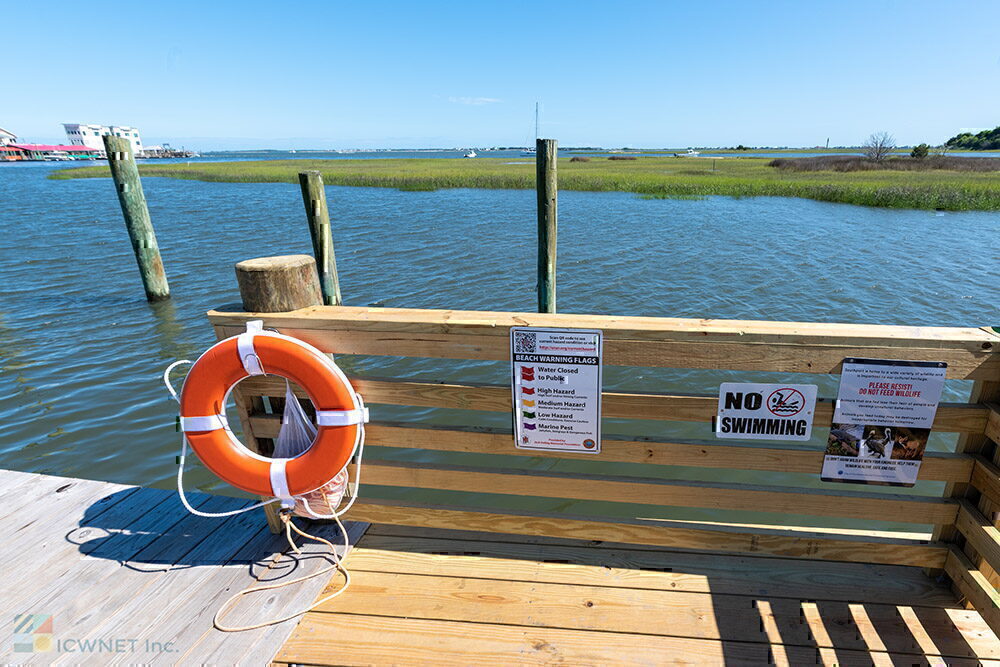 Unfortunately, this long tenure of operation changed suddenly and drastically, when Hurricane Matthew hit eastern North Carolina in September of 2016, causing significant damage to the site.

Before this damage could be addressed, two more storms hit the Cape Fear region hard – 2018’s Hurricane Florence and 2020’s Hurricane Isais – resulting in additional damage that complicated the needed repairs. Deck boards and pilings were destroyed during these storms, (with rickety gaps all along the dock’s walkway), and the city dock was effectively closed to the public for four and a half years while Southport officials formulated a gameplan.

After extensive efforts by city officials, Phase I of the dock repairs were completed in the spring of 2021, and the Southport City Dock was reopened to the public, just in time for the busy summer visitor season.

Today, brand new decking boards mingle with components from the original and nearly 70-year-old structure, and visitors can effortlessly and easily enjoy a stroll over the water to take in views of the Old Yacht Basin and the beautiful Cape Fear River. 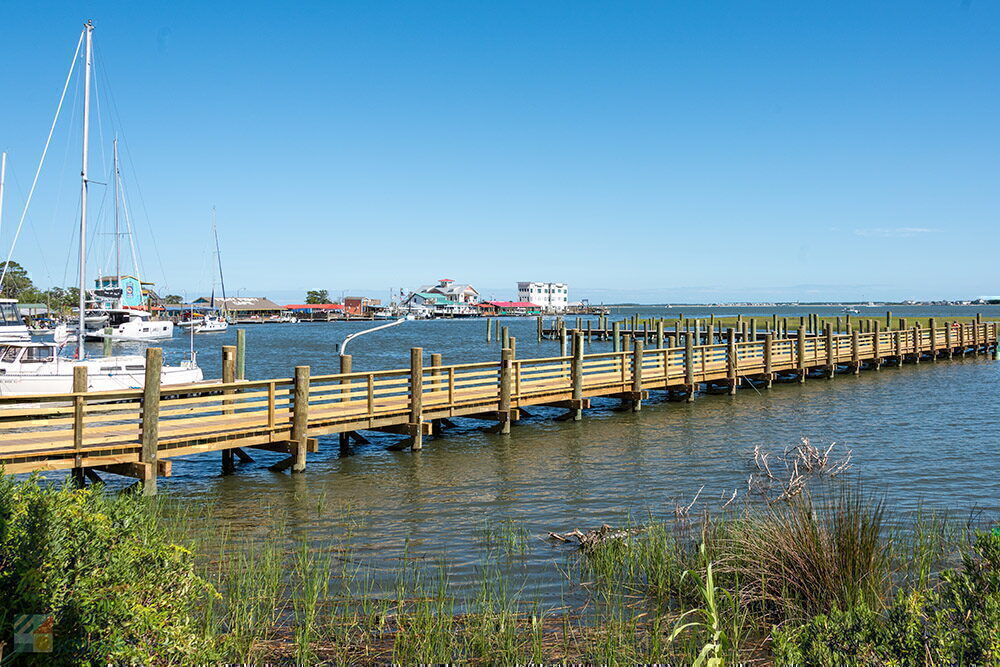 What you’ll find at the Southport City Dock
The Southport City Dock is located on the fringes of the historic and bustling downtown area, which makes it a prime location to enjoy both views of the heart of the city, as well as the quieter and more pristine corners of the Intracoastal Waterway and the connecting Cape Fear River.
Touring the Southport City Dock from start to finish takes just a couple of minutes, but along the way, visitors will encounter a variety of bird species, fish, and other marine life that calls the outskirts of the Cape Fear River home. Explorers will also find exceptional photo ops of the marinas, bars, and restaurants that dot the waterfront, and which are renowned as sites of a few famous Carolina-based movies, including “I Know What You Did Last Summer” and “Safe Haven.”

Visitors who stroll on the Southport City Dock to enjoy the recent renovation may also want to reserve a little extra time to explore the neighboring Southport Marsh Walk, which is a longer over-the-water walkway that ends in a picturesque and shaded gazebo, and panoramic views.
The Southport City Dock is also technically open to transient mariners with smaller vessels, however, visitors who want to use the dock will want to call the Southport Police Department at 910-457-7911 ahead of time to confirm their visit, (and the dock’s availability), and will also need to limit their stay to a maximum of 48 hours. (Note that there are also many other marinas, docks, and boat slips available for short-term stays in the busy Southport area, with more extensive amenities.)

The Southport City Dock has long been known as a symbol of this coastal community’s on-the-water heritage, but in recent history, (and especially in the last five years), it’s also become a symbol of Southport’s resilience, no matter what the weather brings.
Recently open to the public and revitalized to its original stature, the Southport City Dock is a great destination for anyone who wants to enjoy a piece of Southport’s culture, wildlife, and panoramic waterfront views with a single and easy-going stroll.